Remembering a one of a kind woman today

Karley's Note: This post originally ran on March 26, 2008. Just remembering a one of a kind, way ahead of her time kind of woman today. 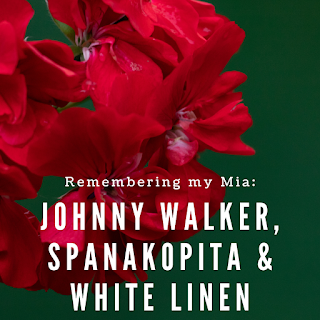 My grandmother passed away yesterday. Mia, as we called her, was 89.

It is not that this was completely unexpected. She had taken a downhill turn several months back. I guess no one is prepared for the death of a family member. I know when my dad died, I knew it was coming and I was at his side, but I still was not prepared. I still, 3 years later, have difficulty believing or accepting that he is gone.

My grandmother was a strong, tough as nails Greek woman. She was also highly ambitious. She graduated from Catholic University in an era when women didn't commonly go off to college in search of a career. I learned from Ancestry.com that she was a nursing cadet during the second World War. She started her career as a nurse and retired as the Administrator of a local hospital here in upstate NY.

People either loved her or the opposite because she had such a strong personality. That strength and defiant attitude allowed her to beat breast cancer and multiple strokes. Her attitude allowed her to get through losing her husband in the 90s and her oldest son 3 years ago. She was not a warm and fuzzy woman by any stretch--not one to sit on the floor and play with her grandchildren, and not the parent who was home baking cookies for her boys...she was at work, her true passion. Don't get me wrong. She did love her family in her own way, and we loved her.

I remember many things about my grandmother. I remember her drinking her crystal glass of Johnny Walker Red while admiring her geraniums (always red). I remember her elaborate parties and the delicious crab fondue. I do have many memories.

One thing I will always remember, though, is Mia's love of beauty and fragrance. Fragrance is emotional. When I smell Love's Baby Soft, I am reminded of my childhood. It was my first "perfume". When I smell honey, I think of my wedding day. I bathed in a honey bath and wore a honey lotion and made a honey and almond comfort scent to wear on that gorgeous 2001 day.
And when I smell White Linen, I am reminded of my grandmother.

When Popu (my grandfather) died in 1994, she stopped wearing White Linen. She had worn it since it came out. She switched and started wearing Red Door, also with a very heavy hand on the sprayer :)

Mia was quirky. She never washed her own hair. She did not have shampoo in the bathroom while I was a child. Instead, she went to her local Sibley's-- a now defunct department store--and had her hair washed and set 2 or 3 days per week. Until the past couple of years, she always had her hair done. ALWAYS. Mia always had her nails done nicely and her good jewelry on whether she was going to work or working in her garden. She read In Style in her mid 80s to try to keep up with trends. She tried to remain hip--even though I don't ever remember panty hose being in style with white walking shorts (or Easy Spirit shoes once she hit 80). As a child growing up, I recall her wearing black and white spectator shoes and carrying beautiful handbags. In the summer, she had sleeveless polo shirts with espadrilles in matching shades. She wore big sunglasses and carried a handkerchief.

As a small child, Mia taught me about "being a lady". I remember being taught at the age of 5 that "a lady always carries a hanky". And that she did.

Mia had her signature lipstick forever: Estee Lauder Rich & Rosy. It didn't go with the olive from her Greek complexion, but it suited her. I remember her coming to my Estee Lauder counter in 1998 and allowing me to make her over. I chose colors to go with her brown eyes and olive skin and I remember her being mortified as she looked in the mirror and then reapplied her Rich & Rosy over the bronze I had chosen for her summer look.

I'd like to take a moment to breathe in the air and recall the smell of her White Linen. Maybe later I will head to Macy's and go by the Lauder counter and spritz some on (not my taste at all...in fact, I am wearing my chocolate blend as I type this) and that will be my own way of raising my glass to a woman who lived a long, beautiful life on her own terms.
Email Post