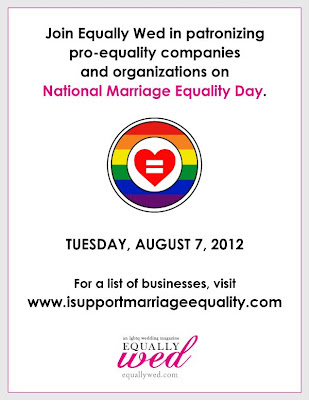 Controversial posts are pretty much avoided here on this blog. I can only count a couple of "issues" we have had here. You can count the wacky, rabid cupcake fans a couple years back who were upset when I chose Heather Saffer's cupcakes the Best in Rochester (she was then the Cupcake Dreamery and is now Dollop). There were also those who get easily offended when I say that small businesses should safety test their products so people don't get things such as staph infections.  Typically, though, we stay away from heated posts. And, for the record, I was right about Heather's cupcakes because she was the ultimate winner of Cupcake Wars on Food Network a few months back ;-)

This is a green beauty blog. It's not a social issue blog or a political blog, so I tend to stay away from those topics here. I must make an exception now.

That said, after all these years, my beliefs shape me as a human being. You know me here pretty well--my insecurities, my flaws, things that get me excited (coffee, chocolate, bargains & robin's egg blue, for example) and you know that I am a somewhat overprotective mom to two boys. I've shared all sorts of stuff with you, my readers, over these past 5 years and 2000+ posts.


Last week, the boys were in the room while the news was on and we had a pretty lengthy discussion about the hulabaloo surrounding Chick-fil-A. For those of you living under a rock, this fast food greasy chicken chain has made lots of news for their stance on gay marriage. More than their opposition to gay marriage, they've spent millions of dollars donating money to organizations which promote bigotry and hatred.


Let's talk about the First Amendment for a moment, shall we?


I write for a living. I am the child of a journalist who was almost put in jail for failing to reveal the name of a source back when I was a small child. I understand how important the First Amendment is. I value the First Amendment and am so thankful to live in a country where we can say what we want to say.


Unfortunately, this is not about free speech. Why are people up in arms over this? Why do I feel sick to my stomach each time a friend "likes" Chick-fil-A on Facebook? It is because this company has spent millions of dollars donating money to HATE organizations. HATE. Organizations like Focus on the Family, Exodus International, Family Research Council, and more.

I am not a religious person. Actually, if I have to be labeled, I would call myself a spiritual agnostic. That is not to say that I have a problem with people with a deep religious faith.  I respect people from all walks of life and with all belief systems as long as you are not promoting bigotry or hatred or inequality--and as long as you do not infringe on the separation of Church & State or attempt to impose YOUR beliefs on others. I also ask that you don't use your religion to pick & choose issues in order to express hate.  Do you eat ham, have a tattoo--do you gossip?  Do you eat seafood? Did you divorce and remarry?  All of the aforementioned items are supposed to be banned in the Bible.

So back to Chick-fil-A and my kids' questions. I explained matter of factly what the situation is and why there is an uproar. Nick asked me why there are people so full of hate and why people cannot be treated fairly. He's 8.  He is right.

And now, due to the power of social media and the Internet, many of us have found out where one another--friends, family members, coworkers, etc-- stands on this divisive issue.


I was brought up by my parents to accept everyone and know that people may look different or have different backgrounds, but that people are all people. And gay people have rights too.

"Gee today I think I am going to be straight." -- Let's be real, my fellow heterosexuals, did you wake up one day and CHOOSE to be attracted to men or women? No. You were born that way and from an early age, you just had that attraction to the opposite sex.  I remember my grade school crushes on the male friends in my life while I was still in pigtails. In fifth grade, I "loved" a boy named Brian D.  In middle school, it was Brian S. I was just drawn to boys. Some girls were drawn to girls. Get over it. I never consciously chose that I would be attracted to the opposite sex my entire life....and neither did you.

I have watched one of my closest friends, a gay man, struggle for years before he was able to tell his parents. He even dated women in an attempt to "will it away", as if that were possible. If you have ever had someone in your life who has endured these struggles, you would know that being gay is NOT a choice.  This is 2012, yet people are so backwards in their thinking that they believe that people who are different that them are somehow going to affect their lives.

Why should it matter to you? Would you rather someone you love live their whole life pretending to be someone they are not?  I have a wonderful family member who passed away several years ago after a long life --a life where she could not be herself because of what other people would think.  She was gay. She did not feel she could tell anyone. She was married briefly to a man. She was not in love with her husband.  She married him because it was expected of her all those decades ago. They quickly divorced. This woman was the most amazing, loving woman. She was active in her community, attended church every Sunday and loved God, and was a teacher for many years. She even met someone she believed was the love of her life, yet to almost everyone, these two women were just roommates.  If anyone had known at the time that they were companions who were in love with each other, it would have been taboo. The outside world believed they were just two "spinsters" who simply shared a home as friends.

Can you imagine not being able to share that part of yourself with your family and friends?  Can you imagine that this would've been so scandalous that you would live out a facade because that's just what was acceptable to society?

In my eyes, gay rights and marriage equality draw many parallels to the Civil Rights Movement.


The climate we are in today seems to be growing more and more hateful.  All it takes is a listen to the divisive, fear-mongering talk show hosts to understand that....or the Facebook posts or "news" bulletins promoting hatred. All it takes is to watch the news and see people are being killed because they are "different", whether it be a different religion or income or sexual orientation.

There is so much ignorance and hate in this world...in this country.

So when my 7 and 8 years olds ask me why people are treated this way, how does one explain it? I try my best, but it is hard to make them understand something that I myself do not.

Well, it appears Chic & Green has gone off on a long tangent. I came to share with you that today is National Marriage Equality Day. Last week, people from all over this country gathered to share their hatred and bigotry by supporting Chick-Fil-A.  Today, those who are tolerant and accepting can choose to shop with any of these fabulous companies (and there are most likely many more) who support gay rights.

I realize that I may have offended some of my readers. I know that we all have different religious views and personal beliefs.  I also believe that if we remain silent when there is something so important, that it sends the wrong message.  When you stand by and watch a global act of bullying (bigotry, hate speech, etc) and do nothing about it, then you're teaching future generations that it is OK to discriminate and be hurtful to others. By keeping mum, you're part of the problem.