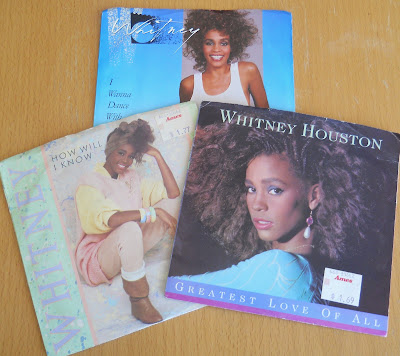 When I was younger, I had a pink stereo system, complete with mint green and lavender accents. It had a dual tape deck and a turntable. Above are three of the 45's most played on this girly girl stereo.  I remember going to the Finger Lakes Performing Arts Center with my Mia, my grandmother, to see Whitney Houston perform when I was younger. What a performance it was.  I also remember my grandmother asking me if I really wanted to see the whole concert because it was getting late and she wanted to beat traffic. Surely I did want to see the entire concert. Her performance was incredible.

Houston's voice was strong and it was beautiful. May she rest in peace.
Email Post