I have a couple sitcoms I like on network television, "How I Met Your Mother" and "The Big Bang Theory", both on CBS. 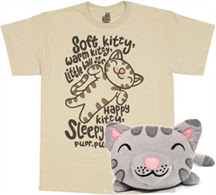 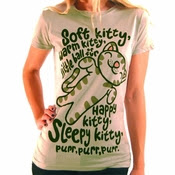 I know I'm not alone in adoring "The Big Bang Theory" and it's easy to see why Jim Parsons is a two-time Emmy winner for his role as Dr. Sheldon Cooper. One thing that is so funny about his character is his love of a certain song sung to him by his mother called "Soft Kitty".


The song has been such a hit that over a million people have downloaded in on You Tube.  Are you looking for a light-hearted gift for that "Big Bang Theory" fan?


I have something right up your alley then! Stylin Online, the largest online pop culture apparel retailer, has released the new singing "Soft Kitty" plush toy and t-shirt.

Stylin' Online has a set for women, a combo for men, and the soft kitty plush on its own as well.  Other options are available on their website. Both are great. I received my set in the mail just the other day and all you do is squeeze the plush animal's front paw, and it sings "Soft Kitty." The shirt is adorable as well and has the song's lyrics on the front.
Every year at our neighborhood Christmas party, we look for "gag" type gifts and those with a pop culture related theme to exchange with our friends.  This set will definitely fit the bill as a fun gift this holiday season!
*Disclosure: I received the Soft Kitty plush and shirt at no charge for review.  This in no way has influenced my opinion and all opinions are my own.
Email Post
Labels: big bang theory jim parsons pop culture soft kitty