I was recently introduced to a company called Little Passports.  I had no idea what it was all about until recently and once I read about it, I knew it was something that the boys would really enjoy. Our first kit arrived yesterday and it kept the boys engaged all evening. I'd like to tell you more, because the holidays are coming soon and I know that we all want something a bit different to get for our kiddos. 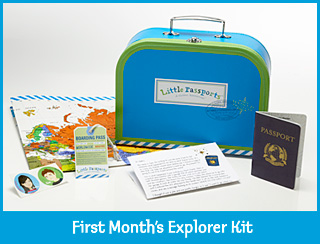 Little Passports is described as "your child's ticket to an exciting global adventure. Inspire a love and understanding of the world as your child learns about a country's geography, history, culture, and language in a fun and memorable way."


Basically, you choose one of several subscription options (we initially opted to go with the month to month until we could get a gauge on how much the boys will enjoy it) and the company will send your kids an introductory kit followed by monthly travel kits featuring countries all over the world.  Next month's adventure, for example, is going to be Brazil.


The first month, your children will receive the Explorer's Kit.  This arrived yesterday and came complete with a little suitcase, map of the world, letter from the two children named Sam and Sofia (whose adventures they will be following), a passport, boarding pass, stickers, activities, and access to online educational games.


Both boys really enjoyed this and they worked together to solve the clues (such as the capital of Pakistan) that would lead them to the answer to the question of which country will be in their next adventure kit.


I am a firm believer in exposing children to as many different cultures and topics as possible. Kids are little sponges and they really do love to learn.  Ben loves math as much as he does his Star Wars Legos and Nick loves learning about Greek Mythology as much as he likes to play with his Beyblades.


Little Passports satisfies the mom in me who wants the boys to learn more AND it gives the boys their love of having fun while learning.  It is a win-win.


Each month, kids get a letter addressed to them from the fictional Sam and Sofia as well as souvenirs such as traditional toys from the countries featured, puzzles, postcards, and more. It really is something different and something wonderful for kids.  My boys are 6 and 8 and they recommend this for kids 5 to 10. I think Little Passports is great for anyone in elementary school.


Here's a link to the Little Passports website. Check it out today! You can also click right above on the banner and it'll take you right there.


Disclaimer: I am an affiliate of Little Passports, but was in no way compensated for this review and I purchased this on my own.