What's In It Wednesday: A Look at Aveeno

Aveeno. Ah, the natural and wholesome oatmeal line...or is it? When most people think of Aveeno, they think of something safe and soothing--something you can and should use not just on yourself, but on your babies as well. Let's take a closer look and find out why this is one of those lines that is definitely not all it's cracked up to be. 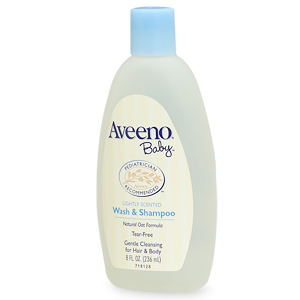 Let's start with the Aveeno Baby Wash & Shampoo. When I see this at Target, I can understand why people buy it. It looks and sounds pure. One could easily think it is OK to use on your baby's skin. It even says "Pediatrician Recommended." I must mention, though, that doctors also recommend Aquaphor and Cetaphil, two of the nastiest products on the market ingredients-wise. How could this not be good? It's the Natural Oat Formula. Here is a look at this wholesome oat-based baby product:
Ingredients: Water, PEG 80 Sorbitan Laurate, Sodium Laureth Sulfate, Cocamidopropyl Betaine, PEG 150 Distearate, Oat Extract (Avena Sativa), Sodium Lauroampho PG Acetate Phosphate, Tetrasodium EDTA, Iodopropynyl Butylcarbamate, Fragrance


Let me first begin with the worst ingredient in this: Iodopropynyl Butylcarbamate. Considered "acutely toxic by inhalation" by the Cosmetics Database, this is one of the last ingredients I would ever want near my children. While it is considered relatively safe by the FDA, it is restricted and/or banned in many other parts of the world. Just because it's legal here does NOT make it safe.


The Environmental Protection Agency has released studies showing that there is also evidence of toxicity to the liver and gastrointestinal tract. In fact, there are nearly 30 published scientific studies suggesting the toxicity of this preservative.


Also in this "baby" wash are two PEG ingredients. While there are far worse ingredients, I still do not advocate the use of PEG ingredients on children. These should be avoided, as many of them are contaminated with 1,4 Dioxane, an ingredient the EPA has called the most toxic they have ever seen. If you see "PEG" on your ingredients labels, please know this.


There is also Sodium Laureth Sulfate. I do not like sulfates. There are far better cleansing options. This is used to clean garage floors at service stations and in the car wash as a cleansing agent. The effects shown in animal studies are very disturbing to say the least. When sulfates are tested on young animals, their eyes can stop developing because of the harmful proteins absorbed. They have been shown to suffer severe damage to their nervous systems and even death. One study I read showed that children who get sulfates in their eyes may get cataracts. Children! Sodium Laureth Sulfate is also very bad for the environment and has been shown to be lethal to fish. Even though sulfates themselves are no longer believed to cause cancer, when they are combined with other compounds, they can be quite hazardous.
While parents think they are buying a gentle oatmeal cleanser for their children, they're buying something full of chemicals. 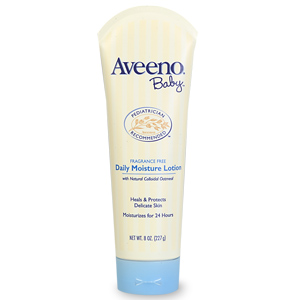 
Quite simply, this is a mixture of industrial chemicals. Nice! What about blending the oat extract with natural oils and butters? No, not with Aveeno. They like to use synthetic polymers and petrochemicals.


Dimethicone is in this. I am not telling you dimethicone is horrible. What I am telling you is that is a silicone-based polymer. In Canada, it is officially classified as in ingredient which is "expected to be toxic or harmful" to our organs. Yet, it is still present in a baby product.


Distearyldimonium Chloride is also found in this lotion. This ingredient is found in super cheap hair conditioners. It is a surfactant with positive ions that react with the negative proteins that are present on your skin. It sits on the skin and doesn't rinse completely clean. In a lotion, this is a questionable ingredient since the chemicals are left sitting. I do not like seeing this in here.


I hate seeing Petrolatum in here, too. Petrolatum was banned in the EU in 2004, as it then became classified officially as a carcinogen. This is part of the UNECE 2004-EU's Dangerous Substances Directive (which is viewable on the official EU site and list of regulatory links). In September 2004 the ban went through and the sale of products containing petrolatum is prohibited unless the manufacturer can provide the completely refining history, that it is free of any contaminants, and that it does not come from a carcinogen. It may be sold only if "...the full refining history is known and it can be shown that the substance from which it is produced is not a carcinogen." (Source: UNECE 2004).

Back to this dirty ingredient... This crude oil derivative has been shown to contain a contaminant called Polycyclic Aromatic Hydrocarbons polycyclic aromatic hydrocarbons (PAHs), which get a 10 on a scale of 1 to 10 for the most toxic chemicals in the Cosmetics Database.
Many say petrolatum is harmless and unfairly "gets a bad rap." It's considered gentle for sensitive skin, most find it to be non-comedogenic, and doctors recommend it. I disagree with the generalization that it's OK to use on your body.
You see, the Food and Drug Administration does limit the amount of petrolatum when it comes to using it in food or medication. However, there is no regulation at all in terms of how much can be used in cosmetics and toiletries. That's how Vaseline and other products containing petrolatum are still sold in the US. You may also remember when it came to light in early 2007 that several dozen popular baby products on US shelves from brands like Johnson & Johnson, Gerber, and L'Oreal were contaminated with a known carcinogen called 1,4 Dioxane. PAHs fall into the same league as 1,4 Dioxane. You don't want to be applying this toxin on your face--or anywhere.
It's not just the baby products that Aveeno fills with harmful chemicals: nearly everything else should be avoided as well. 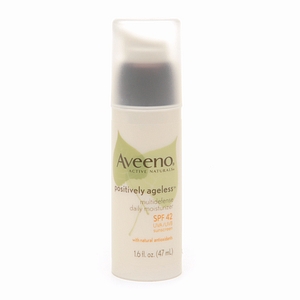 Let's take a closer look at Aveeno Active Naturals Positively Ageless Multidefense Daily Moisture Lotion SPF 42. With the leaves on the bottle, don't you think this is natural? With "naturals" in the product name, it's certainly implied. This is one of the most unnatural lotions out there.
Here are the ingredients:
Active Ingredients: Avobenzone (3%, Sunscreen), Homosalate (12%, Sunscreen), Octisalate (5%, Sunscreen), Octocrylene (2.35%, Sunscreen), Oxybenzone (6%, Sunscreen)

Inactive Ingredients: Algae Extract, Behenyl Alcohol, BHT, Caprylyl Glycol, Carthamus Tinctorius Seed Oil (Safflower), Cetearyl Alcohol, Cetearyl Glucoside, Citric Acid, Diethylhexyl 2, 6 Naphthalate, Dimethicone, Ethoxydiglycol Oleate, Fragrance, Ganoderma Lucidum Stem Extract (Mushroom), Glycerin, Glyceryl Stearate, Hexylene Glycol, Hydrogenated Palm Glycerides, Lentinus Edodes Extract, Magnesium Aspartate, Methylisothiazolinone, Olea Europaea Leaf Extract (Olive), PEG 100 Stearate, P Anisic Acid, Potassium Aspartate, Potassium Cetyl Phosphate, Sarcosine, Silica, Sodium Cocoyl Amino Acids, Styrene Acrylates Copolymer, Tocopherol, Triethanolamine, Trisiloxane, Water, Xanthan Gum
Do the ingredients look or sound natural? Well,it's because they're not. I'm not going to touch upon all of the nasties in this, but I will talk about the worst of the worst in here. The question is, where shall I even begin?
OK, maybe we'll start with the phthalates. You all have heard of these toxins, I am sure. Or maybe the toluene. You know--one of the most toxic nail polish ingredients? No, maybe it's the cancer causing ingredient (oops, there's more than one of those...).
I cringed when I saw that BHT is in this. Chances are you have heard of a toxic chemical being removed from many nail polishes on the market called toluene. BHT is essentially substituted toluene. It is harmful. According to the National Library of Medicine HazMap, BHT is considered to me a "known immune system toxicant." Animal studies have also shown that in low doses, that BHT causes negative effects to the brain and nervous system. This study was published by the Journal of Medicinal Chemistry in 1980 and has yet to be refuted. There are a host of bans and restrictions on BHT across the globe, yet it is still used here.
6 Naphthalate is also in this Aveeno product. It's a phthalate, or an industrial plasticizing agent. Here is what is on the Cosmetics Database page about phthalates: "More than two decades ago, scientists began building a body of work indicating that phthalates are reproductive and developmental toxicants in laboratory animals, particularly in males. Early studies focused on phthalates' ability to cause testicular atrophy (e.g., Gray and Buttersworth 1980). New studies are confirming these findings in humans (Swan et al. 2005, Main et al. 2005)."

Phthalates have been linked from everything to testicular cancer to liver cancer. They are being removed from many products with good reason. One thing to note: if you wear products made with fragrance oils, be 100% certain that the company making them is using phthalate-free fragrance oil. Otherwise, you're using these, possibly without knowing it. Phthalates are commonly found in synthetic fragrance oil.
Methylisothiazolinone is also in here. This is a suspected neurotoxin used as a preservative. It is prohibited for use in skin care products in many places, but is still used often in the US. If I had to choose between this an a paraben-based preservative, I would choose the paraben and that says a lot coming from this anti-paraben gal!
Triethanolamine is another bad ingredient in this. It's both an emulsifier and pH adjuster. Studies have shown that a large number of cosmetics with TEA (short for Triethanolamine) are contaminated with Nitrosamines, which are carcinogenic. Also avoid labels which say TEA Lauryl Sulfate, as it's the same thing. This is restricted/banned, again, in many countries. It's considered to be an endocrine disruptor, too.
The Chic & Green Bottom Line:
Can I recommend Aveeno products to you? Absolutely, positively not. This is a case of a company with a wholesome and natural image tricking their customers into buying products full of toxins. They get an F in my book.