Tom and I went to a really interesting party Saturday night. It was to celebrate the birthday of a  longtime friend and co-worker named Olga. She's a very sweet lady with Ukrainian roots and her party was held at a local Eastern European restaurant called Olga's (coincidence on the name). Who knew that this place existed? I had heard of it, but what you see on the outside nestled between Bingo Palace and a Dunkin Donuts gives you a different impression. Locals, this place was really something else. 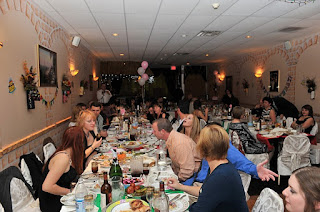 When we arrived, the tables were set with old, fine china along with bottles of vodka, whiskey, brandy, and various wines. Everything was very formal and ornate. There were plates full of food served family style. There was music courtesy of a talented singer and guitar player. Murals covered the walls. Within minutes of being inside Olga's, I forgot this place was in an old strip mall. It was like I was at a big formal family party. It was nice to experience a completely different culture.

There was so much food. New to me foods, too. I honestly thought I was never, ever eat something our new friends translated into "meat Jell-O." This was probably the one dish I would never care to have again. It literally was some sort of meat in a cloudy gray mold of gelatin. We had caviar on homemade crepes, appetizers with salmon and crab.

There was pickled herring. Lots of smoked and pickled things in general, actually. They had pickled tomatoes, different kinds of pickles, and more.  I also tried different beet preparations. I have never liked beets, but I did Saturday night. Almost everything was said in Ukrainian. We had a lovely couple seated across from us who translated each toast and let us know what was in each dish. They showed me how to roll the caviar into the crepes, too.

What I enjoyed most, I think, was soaking up a different culture. Things are different than a typical American birthday party. I truly felt as though I was transported to Eastern Europe decades back. Experiencing something completely different--and about a mile from home--was completely unique.

For example, the pattern seemed to be eat, drink, make a toast, drink, dance, eat....

The table had bottles of Russian vodka, brandy, whiskey, red wine, and champagne. Someone would make a toast to Olga and then we'd all clink glasses and most would have a shot. I had honey pepper vodka. That was spicy and strong. I still felt the effects yesterday. Everyone would drink a bit,  eat more and then get up and dance. This continued for several hours. After the appetizers, different forms of chicken came out. There was Chicken Kiev and also a chicken with pineapples. Bowls full of steaming roasted potatoes filled various spots on the table. We ate and then there were more toasts, more music and dancing. We were full and getting tired, so we left about 4 and a half hours after we arrived. Dessert had not yet been served. It was a most interesting experience.

If you're in the Rochester area, please check Olga's Restaurant out. I am not quite sure about the hours, though. I have heard that she used to be open regularly but that she cut back because she also owns the grocery store next door. There was a sign on the door that if you're interested in having a dinner reservation to head over to the grocery store and ask for one. This is different, but I am telling you that this would be well worth it if you get a chance to go there.