It is so quiet in this house. Even though Tom works from home most days and is downstairs in his office, it is so quiet that I am listening to the sound of our dog, Cannon, breathing.
I do not always like to let others in, but I confess that my eyes have been fighting back big crocodile tears for the past few days. Benjamin, the "baby", started kindergarten today. Last night when I was shampooing his hair, he told me that Gert, his beloved giraffe, was scared about starting kindergarten. Of course, Ben said he wasn't scared--just his Gert. He pretends to be as tough as nails. When something is bothering him, he uses his ratty old stuffed animal to tell me how he is feeling. I always know....
Last night, Tom told me that he was headed to Bill Gray's for a milkshake and asked, "Would you like a snack?" I didn't answer because I was trying to fight back tears. When he looked at me, my mascara had run all over my face and I couldn't stop the floodgates. We have done this before--kindergarten--but the reaction wasn't quite the same. 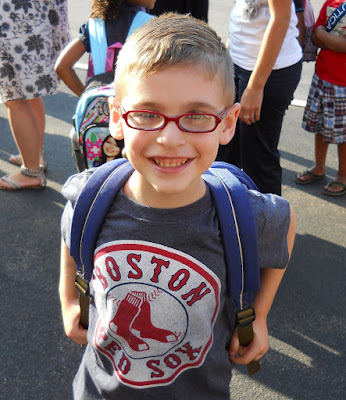 This is Mr. Nicholas, happily starting his first day of second grade on Thursday. Note the shirt--he is the lone Red Sox fan in this family of Yankees fans.
This time seems different. Nicholas is my child who just thrives on school. He loves to go. He is the one who smiled and waved on the first day of preschool as I stood with tears in my eyes holding his 2 year old brother, Ben. Nick said, "Go, Mommy! It is fine!" He has always been fiercely independent and just savors his time in the classroom. 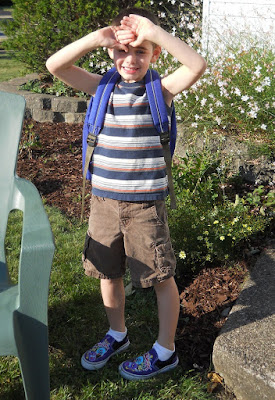 Benjamin this morning....don't you just love the Skechers he picked out in New York City?
Not my monkey. He did well at preschool last year 3 afternoons a week. He had his moments, but he was still my baby at home. When Nick went to kindergarten, I was confident from the start that he would love it. And I was just fine because I still had Ben at home. Ever since Nick went off to preschool, Ben and I have had our "dates". We go to Tim Horton's here in Irondequoit and he chats with Gert over a chocolate milk while I drink my morning coffee. We've done this day in and day out. He still wants to sit in my lap. Friday, we dropped Nick off at school. He started second grade on Thursday. It's been an emotional time. Nick celebrated his 7th birthday on Saturday and that was hard enough to accept.
Now there's a lump in my throat. Benjamin did not cry. He did just fine. I know everything is OK. His teacher is the same, sweet and very experienced teacher Nicholas had. He will have fun today. I will go for my morning coffee all by myself after I publish this post. I might actually get to have a conversation with regulars Dave and Bernie, a man and woman whom I've come to know over the past couple years, without interruption. It will not be the same, though. My baby is in kindergarten. I am so thankful our district still does half day kindergarten because I can pick him up before lunch and perhaps we'll begin a new afternoon tradition this school year for some Mommy-Ben time.
I know a few of you are going through the same emotions right now. I know it'll get easier. I wish you all a wonderful day!

As an aside....I wonder if the boys would consider going to the University of Rochester when the time comes and having me drive them to school each morning? 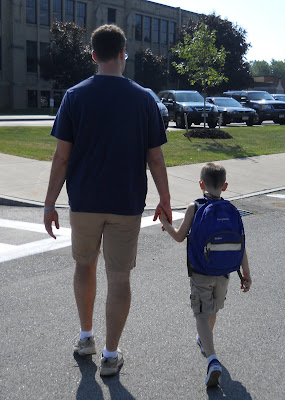