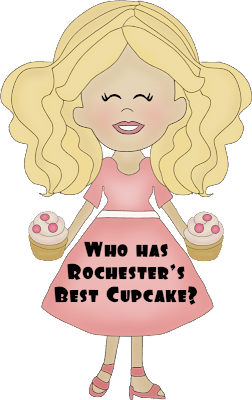 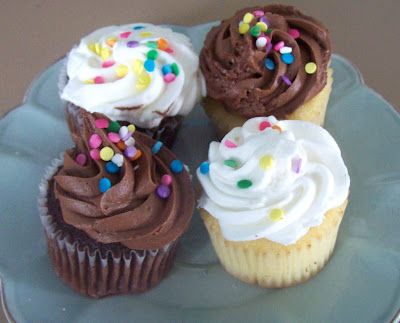 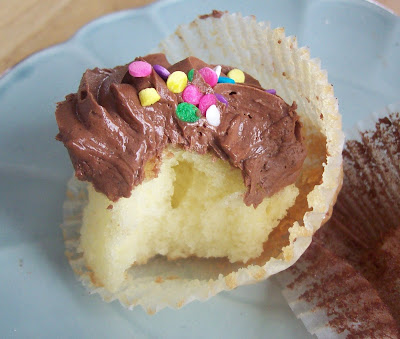 Inside my vanilla cupcake 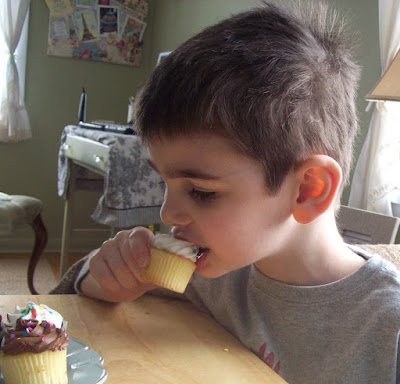 Ben was conducting his own challenge.
You may be surprised to see me reviewing cupcakes for Wegmans. You wouldn't think of trying cupcakes from your local grocery store if you're comparing them to specialty bakeries, but Wegmans is different. If you've ever had the chance to try their Ultimate White Cake, Ultimate Chocolate Cake, or their Chocolate Raspberry Ganache Cake (which I used to love years ago), then you know what I mean. Their cakes are good. Really good.
I wasn't sure about reviewing them until The Cupcake Dreamery suggested a few other local places I might want to consider reviewing. I am glad I did. We're supposed to get quite a big "snow event" later on today through tomorrow, so I headed to Wegmans this morning to get more milk, yogurt, and a few other staples. I passed the bakery and saw the $3.50 package of 12 mini cupcakes and thought, "Why not?"
When I put them in the cart, Benjamin was excited. He refused to go with me this morning to a cupcake bakery, but when I put those in the cart he proclaimed that these were "the best cupcakes because I ate them for snack at preschool yesterday."
I bought the assorted pack. I received 12 mini cupcakes. 3 were vanilla with chocolate buttercreme frosting. 3 were vanilla with white creme frosting, 3 were chocolate with chocolate buttercreme frosting, and 3 were chocolate with white creme frosting.
I honestly do not think I have ever had a cupcake from Wegmans. I was very surprised because I thought these could be similar to the Betty Crocker mix with frosting. I was wrong again. If I have learned anything this week from my cupcake experiment, it is to throw all preconceived notions out the window. I assumed the Vegan, Gluten-free cupcake would be dreadful yesterday and you know what happens when you assume.
Back to the Wegmans cupcakes. Since there were 4 varieties, I had my son (Ben, age 4) choose one for me to review from the package. For reference, my review is for the vanilla cupcake with chocolate buttercreme icing.
They are very, very good. The texture is perfect. Not too dense. Not too crumbly. It is light and airy, while being substantial at the same time if that description makes sense to you. It really is a moist and wonderful cake. It holds its own among the competition very easily. I can also detect the vanilla. It's just a comforting, warm flavor.
The frosting on the one I am reviewing is the chocolate buttercreme. It is delicious. Again, not overly sweet or heavy. The frosting's texture really is superb. If I were reviewing the other, it would not score nearly as well because the white creme is not nearly as good as the chocolate buttercreme.
This is just a fabulous cupcake. Again--$3.50 for 12 minis.
Don't think you have to spend $5 to get a great baked good. These are extremely affordable and are really good cupcakes. They are pretty to look at--kids and adults alike will agree. These are not artisan baked goods, but they really are delicious and definitely worthy of being considered a great cupcake. Don't be a cupcake snob--try them! The texture alone is very impressive.
My one complaint--the ingredients list on my label (from the cake to the frosting to the sprinkles) does have its share of artificial ingredients. Granted, they are close to the bottom of the ingredients list and needed to keep them on the shelves for a couple days in a setting like that, but the ingredients are not as wholesome as you are likely to find in the smaller bakeries. Please keep that in mind if that is of concern to you.
SCORING:
Overall Appearance: 9/10
Texture: 10/10
Flavor of Cake: 9/10
Flavor of Frosting/Toppings: 9/10
Creativity: 5/10
Total Score: 42/50
*For those new to our challenge, here are the "rules": Since I would grow very tired of eating cupcakes if I could only choose one flavor each time, I am not picking just 1 variety and comparing. I want to find Rochester's very best cupcake (to me) overall. I will score each cupcake based on 5 things: overall appearance,creativity, texture, flavor of the frosting/toppings, and flavor of the cake part of the cupcake.
Each category will be scored on a 10 point scale, 10 being the best. The highest overall score possible for each cupcake judged will be 50 points.
This challenge will go on for a while. Since my older son was nearing the end of preschool, I have lost 47 pounds and I am still a bit shy of my goal, so I just cannot eat a cupcake every single day. I will hit two or three places a week, order mini cupcakes when possible, and share with friends on occasion. Expect this challenge to take up to 4 weeks because the recommendations have been coming in, as have emails from bakeries requesting I try their creations.
I also want to say that taste is something very subjective. Just because I adore a certain cupcake doesn't mean you will agree with 100% of my review. The opposite will also be true. With those things said, enjoy the reviews as they come and look for a winner in a few short weeks!
Email Post
Labels: cupcake challenge cupcakes at wegmans rochester's best cupcake wegmans