Sharing Some Recipes for Tomorrow

I host Thanksgiving dinner each year and love to make the dinner. I am a bit of a control freak, I suppose, and do everything. I don't like to get up at the crack of dawn to make the meal, though, so I do as much as I can the day before. That would be today. My day isn't going as quickly as I had planned. I wanted to have the apples all cut for the pie, but haven't started.
My clumsy one bumped heads with the wild one, which somehow caused him to bite his tongue so hard that I thought he would need stitches. This was while the pumpkin fudge was on the stove with the candy thermometer in it--so I am hoping it will still be OK. The important thing, though, is that Nick is OK. His tongue is a bit messed up right now and everything stings it. I am just thankful that he is comfortable now and that he's happily playing.
I have made to things today so far: stuffing and pumpkin fudge. Later on, I will share the apple pie with you. I think I may also do the sweet potatoes, citrusy cranberries, and banana pudding in a trifle dish tonight and post the recipes. Tomorrow, I am making the turkey, mashed potatoes (trying them with feta this year instead of my smashed red skins with bleu cheese).
I'd like to share the recipes in case you're still needing some ideas.
I have made both of these before and can tell you they are delicious! ENJOY. 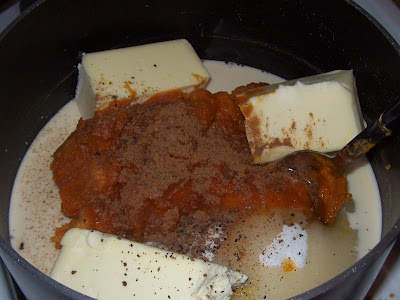 This is the butter, pumpkin, evaporated milk, corn syrup, sugar, and spices. 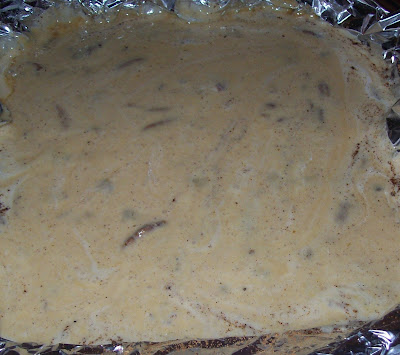 This is how it looks when you pour it into the pan. It will set up in a couple of hours. I always make fudge at least several hours ahead.
PUMPKIN FUDGE
Recipe is from Southern Living, October 2005

Line pan with aluminum foil before you begin to cook the fudge. Once the candy thermometer reaches 234° and the remaining ingredients are added, quickly spoon the fudge into the pan. 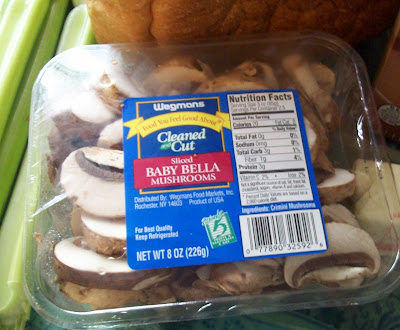 I usually use the sliced baby bellas and then cut them some more. 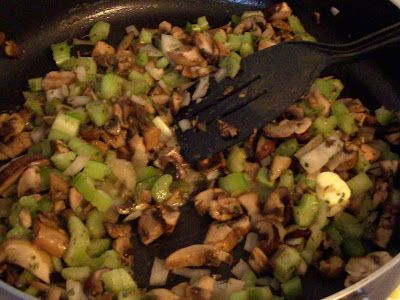 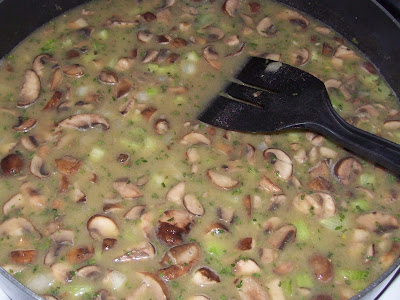 The mushrooms, celery, and onions are in the chicken stock with the thyme and sage. 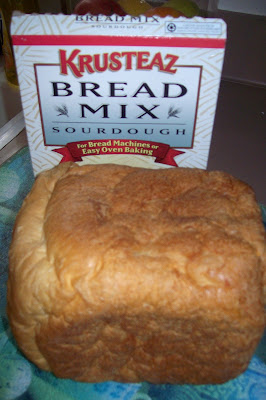 I made this yesterday morning in my bread maker. It was easy peasy! 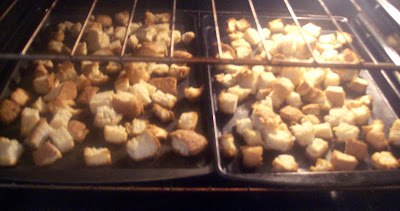 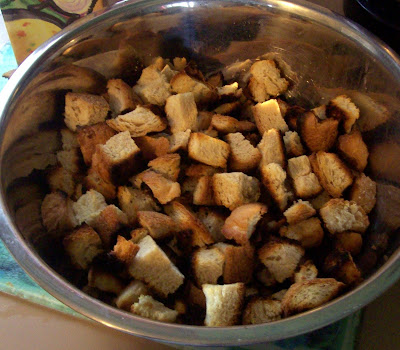 Then the cubes waited in a bowl until the veggies and stock were done.
SOURDOUGH BREAD STUFFING
Recipe is from Dave Lieberman of the Food Network

Cut or tear the bread into 1-inch cubes and spread it evenly on 2 baking sheets. Toast the bread in the oven until completely dry and beginning to crisp and brown, about 20 minutes. (Note: Mine were done in 12 minutes)

Melt 2 tablespoons of the butter in a large skillet over medium-high heat. Add the mushrooms and a few pinches of salt and saute, stirring occasionally, until golden brown, about 6 to 8 minutes. Add celery, onion, 2 tablespoons butter, and thyme. Once the butter has melted, cook, stirring frequently, until the vegetables have softened, about 5 minutes. Add sage and remaining 4 tablespoons butter. Add chicken broth to skillet and stir to combine. Season with salt and pepper, to taste.

Transfer toasted bread cubes to a large bowl. Pour the chicken broth mixture over the bread cubes and toss to combine until the bread cubes absorb the liquid. Pour the mixture into the greased baking dish, and sprinkle with parsley. Bake in the center of the oven until heated through and the top is golden brown, about 40 minutes. Remove the stuffing from the oven and allow to cool about 15 minutes before serving.