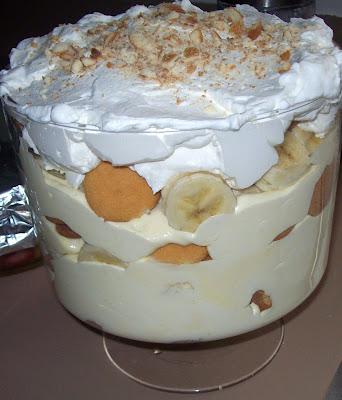 You must try this recipe! I made this for Thanksgiving as one of my desserts and I make it for the boys because it is really their most favorite dessert.
I had never even thought to try banana pudding until we were living in Savannah and frequented Paula Deen's restaurant, The Lady and Sons. I tried it for dessert one day and it was so good.
Since then, I have tried about 5 or 6 different recipes. None have been perfect, and several contain Cool Whip, which I just don't eat. It contains hydrogenated palm kernel oil and high fructose corn syrup. I also avoid anything with hydrogenated oils as often as possible.
This is the result of several recipes put together and is the one I have been making for about 3 years now. It is just delicious!
You will need:
1 package (8 ounces) of low fat cream cheese
1 pint of heavy whipping cream
1 (3.4 oz.) package of instant vanilla pudding mix
3 cups of 1% milk
2 t. pure vanilla extract
1 (14 ounce) can of low fat or fat free sweetened condensed milk
5 ripe bananas (sliced)
3/4 of a box of Nilla Wafers
2 t. sugar
Slice bananas and crush a small handful of Nilla Wafers.
Soften the cream cheese. When it has softened, beat it until it's soft and a bit fluffy. Now add in the sweetened condensed milk, 1% milk, 1 t. of the vanilla extract, and pudding mix. Beat until it's nice and smooth like pudding.
In a separate mixing bowl, beat the whipping cream. Slowly add in the sugar and remaining vanilla extract. Stop beating when the cream is nice and fluffy.
Fold half of the whipped cream into the pudding mixture and gently combine.
Line a trifle dish with some vanilla wafers. Now add a layer of pudding mixture. Add a layer of bananas. Add a layer of whipped cream. Add a layer of Nilla Wafers. Keep repeating the layers.
Use the rest of your whipped cream that remains in the mixing bowl as your top layer. Add the crumbled Nilla Wafers to the whipped cream.
Chill.
This tastes best after it has chilled for several hours, although it is delicious right away, too!
Email Post
Labels: banana pudding banana recipes desserts nilla wafers