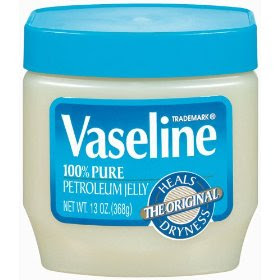 I love reading your comments and always try to respond to as many as possible.

I received a comment yesterday from a kind reader regarding my What's In It Wednesday piece from months back (June 2009) on Clinique Dramatically Different Lotion.

Here is what he said:


"You really do need to do more research before you make claims like "petrolatum was banned in the EU in 2004, as it is listed as a possible carcinogen."

I can purchase good 'ol Vaseline (or generic petrolatum) in every single pharmacy and most supermarkets in both mainland Europe and the UK where I'm based. I can also purchase any one of thousands of moisturisers and other treatments which contain it.

Petrolatum was never banned by the EU."


Petrolatum was, indeed, banned in the EU in 2004, as it then became classified officially as a carcinogen. This is part of the UNECE 2004-EU's Dangerous Substances Directive (which is viewable on the official EU site and list of regulatory links). In September 2004 the ban went through and the sale of products containing petrolatum is prohibited unless the manufacturer can provide the completely refining history, that it is free of any contaminants, and that it does not come from a carcinogen. It may be sold only if "...the full refining history is known and it can be shown that the substance from which it is produced is not a carcinogen." (Source: UNECE 2004).


Source links in my anti-petrolatum stance:

Cosmetics Database of the EWG


This crude oil derivative has been shown to contain a contaminant called Polycyclic Aromatic Hydrocarbons polycyclic aromatic hydrocarbons (PAHs), which get a 10 on a scale of 1 to 10 for the most toxic chemicals in the Cosmetics Database.

Many say petrolatum is harmless and unfairly "gets a bad rap." I wholeheartedly disagree.

It's considered gentle for sensitive skin, most find it to be non-comedogenic, and doctors recommend it. I disagree with the generalization that it's OK to use on your body.


You see, the Food and Drug Administration does limit the amount of petrolatum when it comes to using it in food or medication. However, there is no regulation at all in terms of how much can be used in cosmetics and toiletries. That's how Vaseline and other products containing petrolatum are still sold in the US. You may also remember when it came to light in early 2007 that several dozen popular baby products on US shelves from brands like Johnson & Johnson, Gerber, and L'Oreal were contaminated with a known carcinogen called 1,4 Dioxane. PAHs fall into the same league as 1,4 Dioxane. You don't want to be applying this ingredient on your face--or anywhere. Plain and simple.
Email Post
Labels: carcinogen crude oil petrolatum vaseline