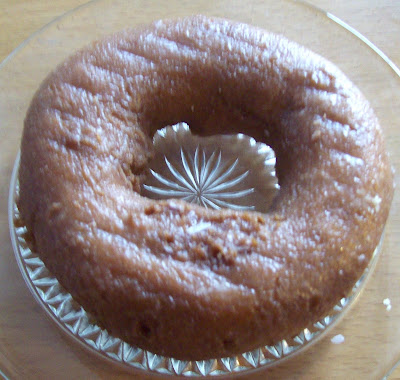 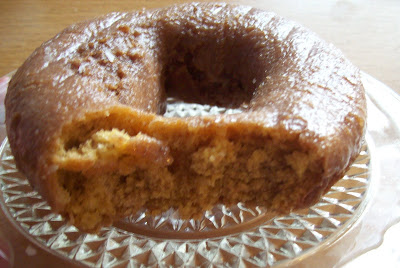 This morning, Ben and I went to Wegmans to get some milk and a pumpkin donut. They didn't make any pumpkin donuts today, so I ended up getting today's pick from Irondequoit's Ridge Donut Cafe. Ridge Donut Cafe is located on Portland Avenue near Rochester General Hospital and Home Depot.
I have had two of their pumpkin donuts before: a pumpkin fried cake (huge, but very dry) and a pumpkin with cinnamon and sugar (very dense...slight pumpkin flavor, a decent one).
Today I had the Pumpkin Glazed Donut.
If you are familiar with Ridge Donut Cafe, you know that their donuts are huge. Huge as in I can never finish a whole donut. Never...not even when I am starving. This morning's donut was no different.
The donut is huge and can easily be shared by two people with average appetites or eaten alone by someone who eats as much as my husband...the man with the amazing metabolism who eats crazy amounts of food and has weighed the same since 1997.
The donut was still warm when I brought it home. That is always a plus. I have had donuts there before later in the day that are very dry, but when I go in the morning, they are always very fresh.
The donut has a sweet glaze without it being too sugary. The donut itself was very good. It was moist, very tasty, and the ideal donut for dipping in coffee....in fact, it's a perfect companion for a hot cup of coffee.
The one thing this donut lacks, though, is an easily detectable pumpkin flavor.
The pumpkin flavor is so very mild that it could almost pass for their Buttermilk Glazed Donut (another good one!).
I am not saying this was a bad donut. It most certainly was good. It's the second best one I have eaten this week...but the gap between Herman's and the competition is huge in my book.
Still, I enjoyed the Pumpkin Glazed Donut and think you will, too!
RATING SCALE
* POOR
**FAIR
***GOOD
****VERY GOOD
*****FABULOUS!
HOW DOES THE PUMPKIN DONUT FROM RIDGE DONUT CAFE RATE?
Size: ****
Appearance: ****
Texture: ****
Flavor: ****
OVERALL: ****
Email Post