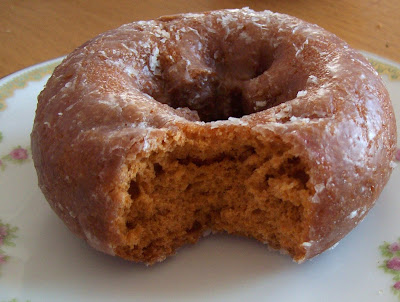 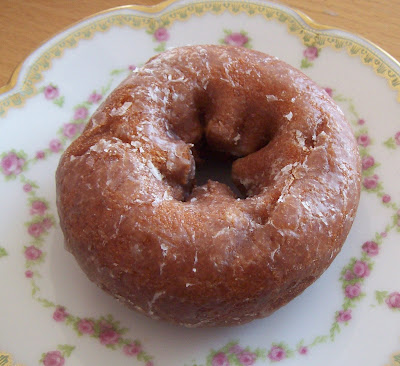 This week's PUMPKIN DONUT CHALLENGE begins with the Pumpkin Donut from Dunkin Donuts. For reference, this came from the location in front of Irondequoit Plaza on Hudson Avenue.
This is the donut I ate yesterday. I typically eat a donut only on Sundays and from a local bakery, The Ridge Donut Cafe on Portland Avenue near Rochester General.
I am making this "sacrifice" for you by trying one pumpkin donut a day this week to review.
The Pumpkin Donut from Dunkin Donuts is basically a pumpkin flavored glazed donut. When I took my first bite, I could see how orange it was, so I expected a strong pumpkin flavor. This was not the case. It tasted, to me, very much like a typical glazed donut with a deep orange interior and a bit denser of a texture.
It wasn't a bad donut, but I was expecting lots of pumpkin flavor.
It was OK, but not one I would order again. If you are there, though, I can recommend the Pumpkin Latte with skim milk!
RATING SCALE
* POOR
**FAIR
***GOOD
****VERY GOOD
*****FABULOUS!
HOW DOES THE PUMPKIN DONUT FROM DD RATE?
Size: ***
Appearance: ****
Texture: ***
Flavor: **
OVERALL: ***
Email Post
Labels: dunkin donuts pumpkin donut challenge taste test