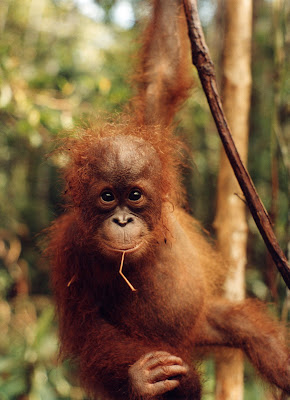 Last January, I published a feature here on Chic & Green to talk about palm oil, and how this vegetable oil has become so controversial.
Many readers ask me why I have such an anti-palm oil stance, and I would like to revisit this issue and follow up on any developments since the original piece was written.
If you're using natural products and regularly buy cold processed soaps, chances are palm oil is on the ingredients label. It is also found in "eco-friendly" candles and tarts. Palm wax is growing in popularity over the past couple years because it delivers a unique shiny appearance to candles. While it may be naturally derived, it is a leader in terms of cruelty to animals and harming the environment.

It is used in most soaps, as it is gentle to the skin and makes for a hard bar. It is used in lipsticks and in lip balms, as it is softening and nourishing due to the high saturated fat content. I have looked at the boxes of so many lipsticks, including major brands from $3 to $30+ many contain palm oil. Palm is in hand soaps, in nearly every single melt and pour base (some don't say palm oil; many simply state "vegetable oils." The one all-natural palm oil free melt and pour base sold in the US that I can find on the net contains peanut oil instead, which isn't a good option for soap. Palm oil is in many shampoos and shower gels as well.

It is not just in our cosmetics.
Do you want an incentive to eat healthier if your habits are poor? This is your time to do something! It is in our processed foods. Just go to Wegmans and take a glance at the back of the package of any major brand of crackers, chips or cookies. Palm oil is in packaged biscotti and treats for gourmet bakeries, too. Some chocolates also contain palm oil, as do many kinds of toothpaste. It is estimated that more than 10% of products in the store contain palm oil.
Palm oil, by the way, is high in saturated fats and raises your risk of heart disease. As heart diseases is our nation's #1 killer of women, shouldn't that be reason enough to stop consuming it?
Palm oil is also used for biofuels. One would think a "green" alternative to the emissions from standard diesel gas would be more beneficial. Fuel has been produced to be used instead of traditional diesel in farming equipment in the United States. That sounds wonderful, but to get this "green" fuel in terms of emissions, thousands of acres of rainforest have been destroyed. Countless wildlife have perished in an effort to be more "green" in eco-speak. It is a catch 22, almost, in that particular situation. Nobody seems to be aware of HOW that type of "green" fuel comes to be. No one speaks of the effect of animals and the rainforest...to the quality of air. So, yes, using this as a diesel alternative is better for the environment when you talk of emissions alone. No one wants to talk about at what cost this came to be.

As a note, we import a great amount of palm oil in the United States. We have plans to import more. In the UK alone, they import over 1 million TONS of palm oil each year.
Palm or petroleum?
When I was reading an article not long ago, there was an interview with reps from Greenpeace. It was said that palm oil is worse than crude oil. I agree. I don't use products derived from crude oil. Yes, they may be "natural" (so is Poison Oak), but that doesn't mean it is good. Truth be told, I'd sooner burn a paraffin candle or rub Vaseline on my lips (which is banned in the EU, by the way) than use a product containing palm oil.

What is so wrong with how we get palm oil?

Palm oil is brought to us by literally destroying the habitat of animals, particularly orangutans. Thousands of orangutans have died because of this trade. In fact, five particular mammals are endangered (3 being on the "critically endangered" list) because their habits have been cleared away for palm oil. These are the Sumatran and Bornean Orangutans, Asian Elephant, Sumatran Tiger, and Sumatran Rhinoceros. This is happening all over Southeast Asia, but the majority of the palm oil (over 80%) comes from Malaysia and Borneo alone. Something needs to be done, and soon. If this continues, the Friends of the Earth predicts that in about 10 years, orangutans will be extinct. Extinct.

Why is this the case? In their natural habitat, these animals are losing their homes to fires, the logging industry, and more specifically, the palm oil industry. Palm Oil plantations abound, and animals are facing the truth that their travel patterns are cut off, their homes are vanishing (ie: the rainforest in general). Animals are much more vulnerable to poachers because of this. Plantation workers have also been discovered to kill these animals to get food, or to just get the animals "out of their way". Numerous cases of killing these animals essentially "for the sport of it" have been reported. Another way the animals are dying is because the plantation workers often set fires to clear space and the fires often burn out of control, destroying a large chunk of the natural habitat of these animals.

Not only are there moral issues when it comes to the loss of life of these animals, but there is a huge environmental impact. Tropical rainforests are being cleared away. Because of the palm oil plantations (made by clearing away the rainforests), over 600 million TONS of carbon are leaked into the air. Pesticides and herbicides are in the air because of this practice. Let's also think about the fish dying each day from what is being leaked from the processing plants there.
What is being done?
The Roundtable on Sustainable Palm Oil (RSPO) was formed in 2004. Its mission was to promote awareness for the use of sustainable palm oil. Strict guidelines were set in place to ensure that changes were made in the palm oil trade. It sounded like a good thing.
Unfortunately, many environmentalists and animal rights organizations have come out and made statements criticizing the RSPO.
Greenpeace, for example, has publicly called the RSPO "a farce". This is because it was discovered that several members of the RSPO actually engage in unethical practices which have caused more death and deforestation. The RSPO has not taken action against these members. When members of a committee pledging to clean up this industry as the very ones causing harm, something needs to change.
When something billed as "sustainable" palm oil was brought to the marketplace by way of contributing to global warming and killing innocent animals, it can't truly be called sustainable.
I really had high hopes for the RSPO as it continued to make strides in cleaning up the industry. I thought I one day would buy items containing "sustainable palm oil." That is no longer an option in my mind. Pretty much any company can "buy" a membership to the roundtable and there isn't much of verification process. That in itself isn't unique--it is much like PETA in that respect.

Not really. Lush, a rather unnatural "natural" products company, has taken steps to eliminate palm oil. They came out with Green Wash, a palm oil free melt and pour soap. There was all sorts of hoopla, but when you consider that this also was made of propylene glycol, sodium lauryl sulfate, and EDTA, I would not try it. All of their other soaps contain those harsh ingredients and palm oil.
Burt's Bees, a company I used to love and have so much respect for, used to list palm oil on their soaps. Now the ingredients list simply begins with "vegetable soap base"....a clever way to avoid saying "palm oil" for less savvy consumers.
What can you do?
*You can read the ingredients labels religiously. If ingredients are not listed, don't buy. There are options. You just need to spend a bit of time exploring them.
*You can ask your favorite company to consider replacing other oils for palm oil. It truly isn't necessary to make a good bar of soap.
*You can use beeswax or soy wax instead of palm when buying candles and tarts (although I no longer recommend soy wax. Read here to learn why.)
*Don't eat margarine or shortening, is palm oil is often used in this. You typical "vegetable oil" at the grocery store almost always contains palm as well.
The Bottom Line:

If you are an animal lover, chances are you avoid companies that conduct animal testing. You may not use products with carmine (crushed insects used to color lipstick and blush). Why is palm oil any different? The bottom line is that we need, in my opinion, to educate ourselves when it comes to what we rub into our skin, put on our faces, shampoo or hair with, etc.

A conscious effort is made by most of us to pay attention to the foods we put into our bodies. We want to be healthy. We want to be eco-friendly. We don't want animals to be killed so our soap can be firm.

At what cost, though, to have softer skin or a longer lasting bar of soap? Is it worth it? There are so many fats (oils) out there derived through humane methods that we could choose to use instead. Olive oil...coconut oil...rice bran...sweet almond...grapeseed....apricot...jojoba... macadamia nut....kukui...so many more! Hemp Seed Oil is a wonderfully nourishing, yet cruelty-free and eco-friendly oil.

I had a favorite stuffed animal as a child, Herman. Herman was a stuffed orangutan from Washington, DC's National Zoo Gift Shop. I wanted that one because I always thought orangutans were "cute". I would hate to think that because I wanted a harder bar of soap or a creamy, yet firm lipstick that I would be contributing to the probable extinction of animals within my lifetime.
Email Post
Labels: animal cruelty deforestation orangutans palm oil RSPO