Rewind: The New Fashion Icon for Our Time

NOTE: Karley is feeling very un-chic and looking VERY green right now due a most unwelcome stomach virus. I will not be on my computer today and will hopefully be back tomorrow. I thought today would be a good day for a REWIND on Michelle Obama's sense of style. This was originally posted during the Convention in late August. 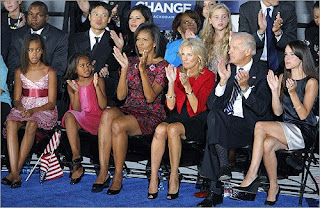 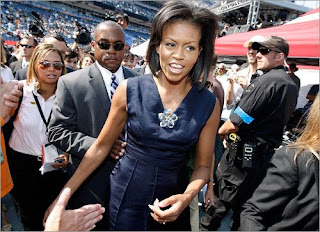 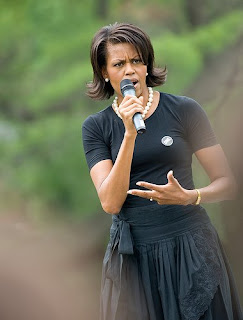 Photo above from Vogue

City Girl Lifestyle's post today about Audrey Hepburn gave me an idea for one of my blog posts for the day. Every now and again a woman comes along who is truly the epitome of grace, beauty and style. We look back and think of Audrey Hepburn, Jackie O., Grace Kelly and Princess Diana.

All were women whose style was graceful, classic and full of elegance and poise. Their style has stood the test of time, and I look to many of them as fashion icons.

We have a new icon for our time: Michelle Obama.

I watched the Democratic National Convention the way my husband and his friends watch the Super Bowl (or the way I watched Game 7 of the ALCS and Aaron Boone won the game for the Yankees in fall 2003). The DNC had my blood pumping, a smile spread across my face, and a renewed sense of hope and admiration for this already passionate, very political person.

The DNC, for me, ranked right up there with sitting in the front row with my mom, hubby, and mother in law in 1999 watching Elton John perform just a few feet in front of us. It was even better than seeing James Blunt and Sheryl Crow a couple weeks ago--and I adore James Blunt! The DNC for me brought out the same fanfare as it did for Nick when we took him to see The Wiggles when he was 2. You get the idea. The DNC was like going to see Sex and the City on the big screen. The DNC was about bringing about hope and change, though, and that is what made it so great.

Barack Obama's speech last night will be remembered for decades to come (at least). It will be talked about when my grandchildren go to school. The presence of Hillary and Bill added even more to the wonderful dynamics. I am so excited about this election, if you cannot tell.

One thing that I was also watching from the convention was the fashion. I thought Hillary might wear something a bit more exciting than her coral pantsuit. Or at least I hoped she would...Chelsea's hair looked fabulous. Jill Biden is another beautiful woman and she looked terrific.

What stood out the most was Michelle Obama's sense of style, especially as we move closer to November. She may be refreshingly outspoken, but she is also a rising fashion icon.
Mrs. Obama was stunning last night. Her dress was a brilliant combination of colors for her, and her makeup was flawless. I found a wonderful picture of her in a navy dress at Envesco Field doing a walk through yesterday and I believe it is the best dress I have seen on her--it was such a classic, Jackie O.-inspired look.

I also find it refreshing that this classic beauty appears to be healthy, not a size 2, but a healthy "average" weight. I hope our children will stop striving to be thinner than toothpicks and realize that true beauty comes from within. I want the children of the future to see right before their eyes that size is not what constitutes beauty and likability--that one can be stunningly beautiful, have brains AND be a healthy size. It will be nice to have that element of brains AND style and beauty back at 1600 Pennsylvania Avenue in the fall. Don't get me wrong. Laura Bush is an intelligent woman. I just happen to picture this particular First Lady wearing "mom jeans" with tapered legs and pleats when she's having a family weekend away at the ranch.

Michelle Obama is truly going to evolve even more into a 21st century fashion icon. More than that, her example of beauty is going to quite possibly change people's ideas of what truly makes a woman beautiful.
Email Post
Labels: fashion icon michelle obama style