Let's Talk About Skin & Makeup at The Golden Globes 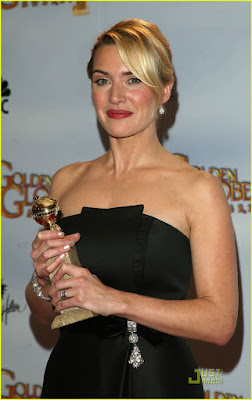 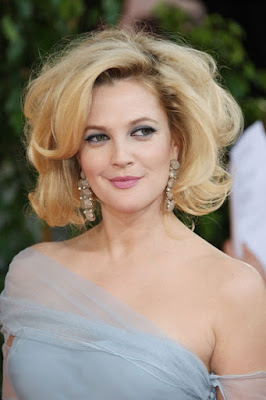 This could have been so lovely! 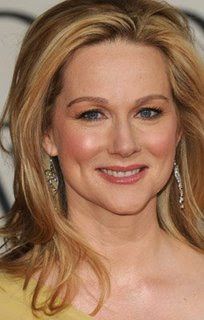 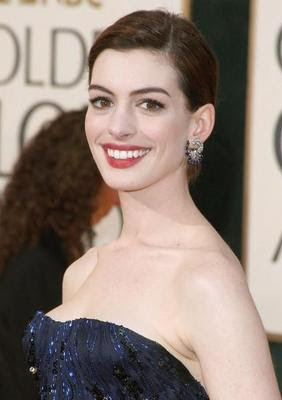 Anne Hathaway will keep her gorgeous porcelain complexion by continuing to use sunscreen and not smoking. Anne was wearing mostly Lancome makeup.
If you watched the Golden Globes Sunday night, chances are you're still picturing Drew Barrymore's hair.
What a mess that was, in my view! I see where her stylists were going with it. They were going for a retro glam look, but with the roots and the dated looking (on camera) eye shadow, it looked to C & G as though the actress just awoke from a long night of partying or as though she was returning from a costume party dressed as Marilyn Monroe. Barrymore is such an attractive woman and this look was just a dud, in my eyes...although opinions are subjective.
Part of the problem is the difference between how a look translates to a tv audience and how it looks in print or in person. In a photograph, Barrymore's eyes look retro chic. The liner was a beautiful contrast to the soft blue of the dress and on the lids. On tv--especially HD-- it looked like disco blue to me...very dated.
Her hair could have been great. If you know me, you know I love all things vintage and that I love retro glam. This just didn't do it for me. Her hair just was too much. You know, if Barrymore's hairstylists had applied Cocoa Pink Glissade Anti Frizz, it would've tamed all those flyaways in Drew's hair.
When I think about Sunday night, though, I am really thinking about skin and makeup. I was really amazed by some incredible looking makeup and skin, and also struck by the effect of smoking on the skin of some beautiful celebrities.
Take Kate Winslet for example. She is incredibly gorgeous and one of my favorite actresses. She has beautiful porcelain skin and it looks as though she is a regular user of sunscreen. Her makeup (Lancome) was applied very well and looked terrific. That being said, she is a smoker. The toll it has already taken on this beauty's skin was quite apparent Sunday night.
Winslet is a beautiful woman and I commend her on her stance on not getting Botox and cosmetic sugery. She has repeatedly come out saying she will embrace againg naturally (yay!) and that she is comfortable in her own skin. That is fabulous and I agree 100%. That said, the smoking had had some effect already on her skin in terms of its tone and lining around the eyes.
Luminous. Radiant. Perfect. My winner for the absolute best skin and makeup is Laura Linney beyond a shadow of a doubt. She usually flies a bit under the radar when it comes to her Red Carpet style, and she was just stunning.
Her complexion looked flawless, and her makeup was expertly done. I was quite happy to see that her makeup was done my Joanna Schlip, a celebrity makeup artist for Physicians Formula. Schlip also did Christina Applegate's makeup, using several Organic Wear items on her. Her skin looked beautiful and she looked great. Linney was wearing a mix of Dior and Physician's Formula. Skin care on both was said to be La Mer.
Here is what Laura Linney was said to be wearing:
Skin Care: La Mer The Mist, La Mer The Moisturizing Lotion, La Mer The Lip Balm
Foundation: Christian Dior DiorSkin Pure Light in Light Beige
Concealer: Christian Dior DiorSkin Sculpt Lifting Smoothing Concealer in Beige
Powder: Physicians Formula Organic Wear 100% Natural Origin Pressed Powder in Buff Beige
Organics
Bronzer: Physicians Formula Bronze Boost Glow-Boosting Pressed Bronzer in Light to Medium
Blush: Physicians Formula Organic Wear 100% Natural Origin 2-in-1 Bronzer and Blush in Light Bronze/Pink Rose
Eye Shadow: Physicians Formula Shimmer Strips in Miami Strip
Eye Liner: Physicians Formula Eye Definer Felt-Tip Eye Marker in Soft Black and Christian Dior Crayon Eyeliner - Waterproof Trinidad Black 094
Brows: Christian Dior Powder Brow Pencil in Blonde
Mascara: Christian Dior DiorShow
Lips: Christian Dior Dior Addict Ultra Gloss in A Lick of Taffy /Dior Contour Lip Liner in Nude Rose
Highlights: Physicians Formula Shimmer Strips in Sunkissed Glow and Physicians Formula Organic Wear 100% Natural Origin 2-in-1 Bronzer and Blush in Light Bronzer/Pink Rose
Body: MAC Strobe Cream.
Lots of Physician's Formula! How exciting. Speaking of PF, I have three new Organic Wear products to try tomorrow morning! they came today! I am going to try the Loose Powder Foundation, Bronzer  (loose) for Fair Skin, and Concealer Stick.
Email Post
Labels: golden globes organic wear physicians formula red carpet makeup red carpet skincare