GET OUT AND VOTE! 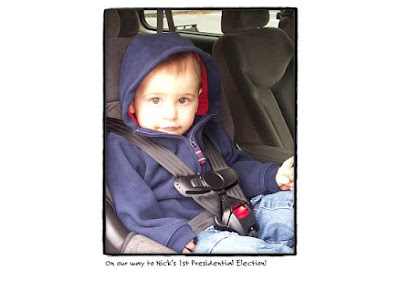 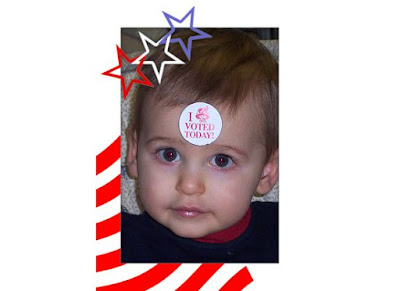 Nick after we voted Presidential Election 2004
Tomorrow is Election Day. Unless you're from Mars, I am sure you know that, though.
I normally don't talk about politics on my blog. I've made a couple of mentions of Cindy McCain's convention fashion, as well as Michelle Obama's sense of style, but I do not se this blog to go on and on about my political beliefs. Outside of this blog, absolutely! Those who know me well know I love politics. I love watching political conventions, debates, coverage...I love getting my hands on every newspaper I can to read endoresments from major markets, etc. I wasa poli sci major, what do you expect? Chic & Green is an Indie shopping blog, for the most part. That's why we talk about Etsy and unusual finds each day.
Indie shopping aside, I want to say that this is the single most important election of our lifetime. It could very well be the most imporant election in our nation's history.
My brother in law, Zach, is a soldier. My dad's cousin Peter, is a sailor. Our nephew is pondering enlisting with the Army like his Uncle Zach did back in the 1990s. So many of us have family members in the US military. If you do, you understand the effect this has had on their spouses and children. Zach was in Iraq for about a year, arriving on Christmas Day 2005. He returned home in the late fall of 2006 and left after Thanksgiving 2007 to return to combat for 15 months.
We are so blessed to have spent time with Zach and his family last week. It flew by so fast. It was a bittersweet visit. It was hard watching Zach and his wife and two little boys (the older one is almost 5, the baby is 14 months) having so much fun only to realize that Zach will leave again for Iraq this week.
Our family is supporting Barack Obama. I believe Obama is the best man for the job. People sometimes say, "but he doesn't have experience"...neither did Abe Lincoln, Thomas Jefferson and so many other great leaders in our nation's history. We need a fresh start with hope and common sense.
I am so eager to go to the polls tomorrow. Ben will go with me in the AM. Nick will go with Tom in the afternoon. I will sit up until the wee hours of morning wataching the coverage the way Tom sits at the edge of his seat watching the Super Bowl.
Go vote. Whether you're voting for Obama or McCain, it's not the time to sit at home and say that your vote doesn't matter. Voter apathy exists with nearly every election. Maybe you have a cold. Maybe you have kids at home. Set an example for them--get out and vote.
We are fortunate that we have the right to vote for whomever we choose without fear of persecution. Get out there and vote!
Email Post
Labels: barack obama Cindy McCain election john mccain michelle obama voting