New pooch, another year older and so much to share! 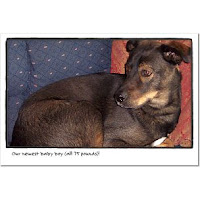 What an eventful couple of weeks. As you may have noticed, my blog has not been updated in over 3 weeks.

I have had so much going on and need some time away from the computer.

First off, many of you remember that our beloved 13-year old Cocker Spaniel named Buddy died just before Christmas. Losing him has been a very difficult experience. We have had so many losses in the past 2.5 years--my dad, Tom's grandma, and Buddy.

We have been so blessed with the most amazing little boys and know that our family is complete, but we finally have realized that we are ready for another dog to share our lives with.

Buddy was adopted in 1997 at the Humane Society, so we returned there on the 18th of this month and found a wonderfully sensitive, kind-hearted and gentle soul: a 75 pound, 3 year old German Shepherd with floppy ears named Cannon.

Cannon wormed his way into our hearts immediately, and while loving him has come so easily,
this week has not been without its struggles! First of all, Cannon has some major separation anxiety issues. I am not talking about barking and crying at the door--I am talking about jumping 4 feet up to a window, breaking through the screen and WALKING ON THE ROOF. He did this Friday night as we chatted with our neighbors in their yard. He missed us and thought by walking on the roof above the garage he would attract some more attention.

Keep in mind I am a stay at home mom and the longest period of time he has been left since we adopted him has been 2 hours.

Today, I had to take the in-laws to the airport. Nick, Ben and I dropped them off and were home in 30 minutes. When we arrived home, Cannon was sitting in the back yard next to the gate of the picket fence wagging his tail. Bear in mind, Cannon was INSIDE THE GARAGE when we left. He climbed on top of trikes and Tom's bike, broke a baby gate and jumped out the window.

Our vet says Cannon may require "pharmacological assistance", namely Fluoxotine. In other words, Prozac. Now I am all for Prozac and people needing it to treat illnesses, but haven't thought my pooch might ever need it! The vet also wants us to take Cannon to Cornell University to meet with their experts on the matter.

Needless to say, Cannon has brought some excitement to our lives! The most important thing, though, is that Cannon LOVES children. He adores both boys, but has a soft spot already for Nick.

In other news, it's birthday time in this house! I celebrated mine on Saturday. Nick will be FOUR one week from tomorrow. We spent the weekend getting all of his "Go Diego, Go" must haves for his party. It looks like I'll be headed back to the party store for the 4th time because I apparently forgot the pinata!

Next week also marks the beginning of preschool for Nick! He will go 3 days per week for 2.5 hours! He and I are both excited!

In business news, I am taking a brief hiatus until the weekend after Nick's preschool begins.

I will then have TWO Etsy shops: my self-named Facial Care Boutique and Northfield Road.

I am REALLY excited about Northfield Road's grand opening on 9/9. I have about 40 greeting cards, all handmade and dipped in coffee and cinnamon, oven-baked and then decorated in altered art fashion with an emphasis on shabby chic, prim and vintage styles. In addition to cards, this little shop will feature my soy candles and tarts!

That's the update! I am also working on a very thorough review blog of SULFATE FREE and PARABEN FREE hair care! I've tried and tried and will share my thoughts on the good and bad natural shampoos and conditioners on the market.